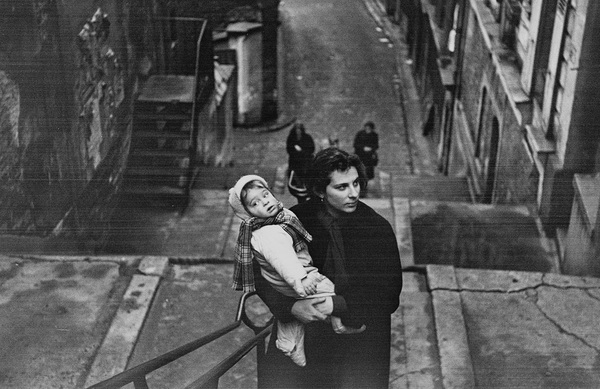 Robert Frank moved to New York in 1947 after studying photography. There he worked for a few months as assistant photographer to Alexey Brodovitch, the art director of Harper's Bazaar. At his suggestion, Frank used a 35mm Leica, which allowed for intuitive and spontaneous shooting practice. In 1949, Frank met artist Mary Lockspeiser and married her the following year. After the birth of their son Pablo in February 1951, Robert and Mary returned to Europe again and again, including to Paris where this photograph was taken in 1952. Frank must have confused the date, because he incorrectly dates the print "1950," although Pablo was not yet born at that time. Knowing the later burden of his son Pablo's physical and mental illness and his early death in 1994, makes the photograph a painful personal record. It is not surprising that Frank rarely printed personal photographs like these later. A legendary collaboration began when Swiss publisher Walter Keller (Scalo Verlag) published Robert Frank's visual autobiography The Lines of My Hand in 1989. The present print originally came from his private collection.