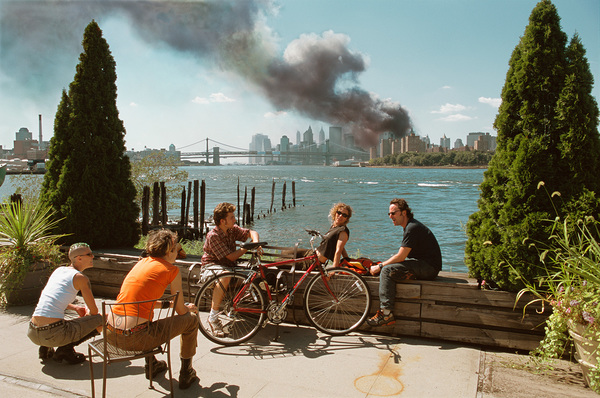 Famed Magnum photographer Thomas Hoepker was there to capture a moment that would later cause an uproar - A photographic icon and one of the most controversial reportage photographs. Young people relax casually during their lunch break along the East River while a huge plume of smoke rises from Lower Manhattan after the attack on the World Trade Center. As the Twin Towers burned in the distance, none of them seem to be aware of the horrific events unfolding behind them. The implication of this defiance and relaxed detachment towards the violence and death just across the water from these everyday New Yorkers, caused much shock and offence. Therefore, the photograph was kept under lock and key for five years by Thomas Hoepker himself. It seemed too inappropriate to him. After the first publication for Thomas Hoepker's retrospective in 2006, it became the target of numerous media comments while later it should become one of his most famous photographs. Thomas Hoepker remained faithful to the credo not to interfere with the events he witnesses. “Starting a conversation or asking permission would instantly change any scene I stumble upon in real life. The change would start right there, the resulting recording would be a lie”, he later claimed. "Don't get involved" is one of the credos of documentary photography and in hardly any photo this is so clear as in the present image. The print is an artist print of the long out of print edition in 60 x 90 cm and comes directly from the photographer.

PROVENANCE the print comes directly from the photographer