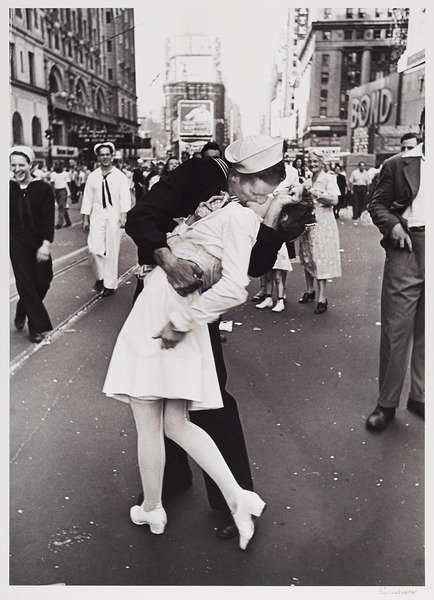 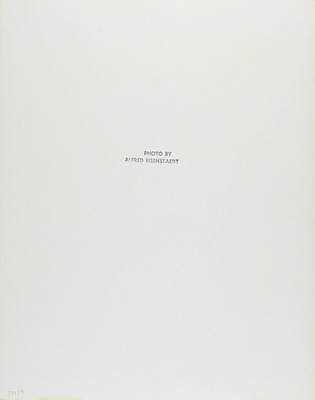 Signed by the photographer in ink in the margin, his “PHOTO BY ALFRED EISENSTAEDT” stamp on the reverse

Alfred Eisenstaedt, pioneer of modern photojournalism, created his most famous icon with V-J Day Kiss in Times Square. Born in Dirschau (now Poland) in 1898, the photographer began his career as a photojournalist in Berlin in the 1920s. In 1935, he emigrated to the U.S., where he worked exclusively for the then newly founded magazine Life between 1936 and 1972. For them he photographed over three decades more than 2500 reportages, the greats of the world, picture reports from politics, science, culture and everyday life. V-J Day Kiss in Times also appeared on the cover of Life. The picture was taken on August 15, 1945, the so-called "Victory over Japan Day". On that day at 12:00 noon Japanese local time, Radio Tokyo had broadcast a statement by Emperor Hirohito: Japan would accept the Potsdam Declaration. Japan, the last belligerent enemy power, had surrendered. Four years after the U.S. entered the war, peace finally reigned. All of New York was in the streets celebrating. Eisenstaedt saw his famous sailor grab a nurse and kiss her, and pulled the trigger four times with his Leica. In his shot, the exuberant moment of joy is united with a moment of world history. This signed print from the 1970s comes from Eisenstaedt's direct family estate.

PROVENANCE Eisenstaedt Family Estate; the print was gifted by the photographer to a family friend, who later returned it to the family

Signed by the photographer in ink in the margin, his “PHOTO BY ALFRED EISENSTAEDT” stamp on the reverse