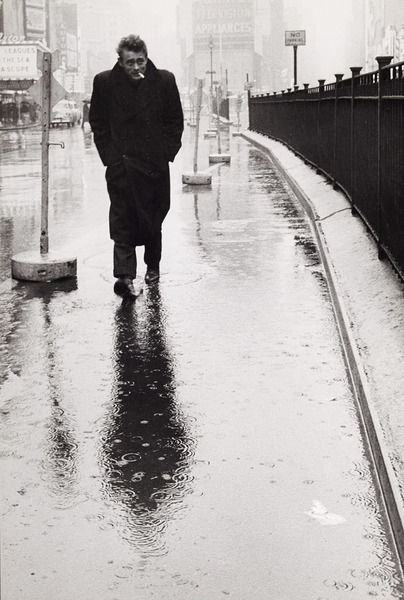 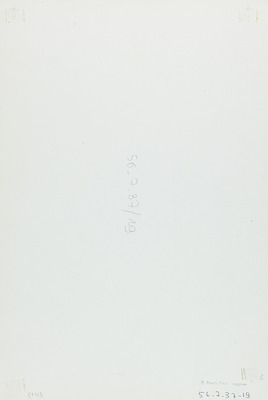 Photographer's agency stamp and handwritten neg. no. in ink and pencil on the reverse

Dennis Stock, who was brought to Magnum by Robert Capa in 1951 as a "Hollywood photographer," met James Dean through director Nicholas Ray at a preview of East of Eden in 1954. Stock suspected Dean would become a star and suggested Life write an essay about the then 24-year-old actor. The photo series became a legacy. Both of these photographs were taken in early 1955, when Stock accompanied Dean to New York and his childhood home, Fairmount. Stock and Dean first spent a week in rural Fairmount. The small town had left its mark on Dean, who had grown up here in his uncle's family after his mother's untimely death. It was to be his last visit home, however. Stock later recalls that Dean suspected he would not see the farm again. He said he said goodbye and asked him for one last shot. Thus was born the famous portrait of Dean in profile wearing a cap in front of the farmhouse driveway. Dean is looking straight ahead and his dog Tuck is turning away. While Fairmount shaped Dean, New York made him a budding movie star. It was here, among other shots, that the key image James Dean on Times Square was created. It was intended to posthumously fuel the image of the tortured, melancholy and impetuous rebel. Chance and staging meet perfectly - the rain, Dean's stooped posture, the watercolors, the actor's mirrored outline, the cigarette in the corner of his mouth, Times Square disappearing in the haze - all these compositional finesses and serendipitous coincidences helped the shot achieve its well-deserved iconic status. A few months later, on September 30 of the same year, Dean was killed in an accident with his new Porsche Spyder on Highway 466.

Photographer's agency stamp and handwritten neg. no. in ink and pencil on the reverse