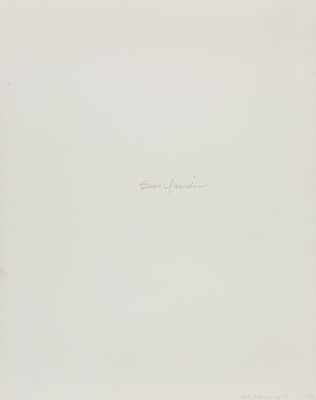 Signed and annotated by the photographer in pencil on the reverse

It was circus enthusiast and Magnum archivist Sam Holmes who inspired Bruce Davidson to undertake one of his first independent projects. Bruce Davidson was just 24 years old and had recently joined Magnum when he joined the Clyde Beatty circus troupe for several weeks. Davidson's focus was not on the performances and shows, but on the strenuous daily lives of the individual performers. When he first explored the grounds, he saw a smallish clown outside the circus tent smoking a cigarette -- Jimmy Armstrong. With his Charlie Chaplin disguise, white-painted face, bouquet of paper flowers in hand, and pensive expression, he conveyed a moment of loneliness and otherness. The photograph would become one of his most famous images. Davidson stayed with the circus for nearly four weeks and developed a particularly close relationship with Jimmy Armstrong. The strength of character Davidson saw in the "Little Man's" personality made a lasting impression on him. Davidson famously never identified with the position of the objective and detached reporter. His view and his approach were always characterized by empathy and a personal sympathy. Thus, like few others, they show an unerring sense for touching moments whose poetry unfolds precisely in their randomness and fleetingness. "The fact that Jimmy Armstrong, the clown, allowed me that close into his soul was important to me," Davidson later said. This early print was printed in the 1970s and is signed in pencil on the reverse.

Signed and annotated by the photographer in pencil on the reverse