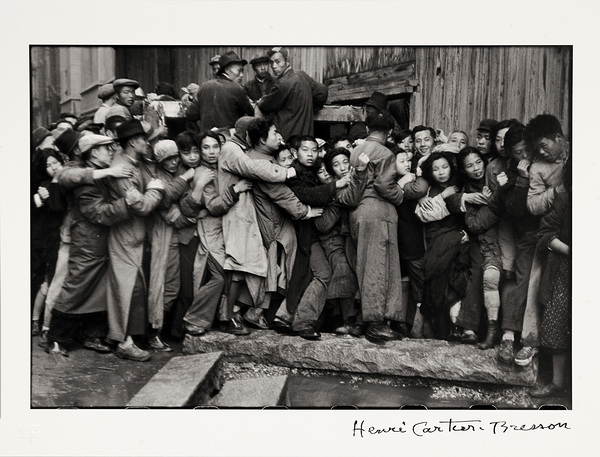 Last Days of the Kuomintang

Signed by the photographer in ink in the margin, his blindstamp in the margin lower left, Fondation Henri Cartier-Bresson stamp on the reverse.

Cartier-Bresson took the most powerful photographs of the Communist takeover of China and the birth of the People's Republic. China had been torn apart by civil war since July 1946 between the troops of Communist Mao Tse-Tung and the Nationalist Kuomintang forces under General Chiang Kai Shek. As the Communists' victory became apparent, the value of paper money plummeted. The Kuomintang decided to issue 40g of gold per person, which led to a kind of gold rush in December 1948. The photograph shows Shanghai residents exchanging money for gold in front of a state-owned bank. The police made only a half-hearted attempt to restore order. Ten people died in the stampede. The iconic photograph has remained a symbol of mass panic following regime change ever since. Cartier-Bresson included it in his first book of photographs, The Decisive Moment, published in 1952. This signed print originally came from the photographer's archive, and was acquired by the current owner in 2011 in the auction 100 photographs from the Henri Cartier-Bresson Foundation.

Signed by the photographer in ink in the margin, his blindstamp in the margin lower left, Fondation Henri Cartier-Bresson stamp on the reverse.