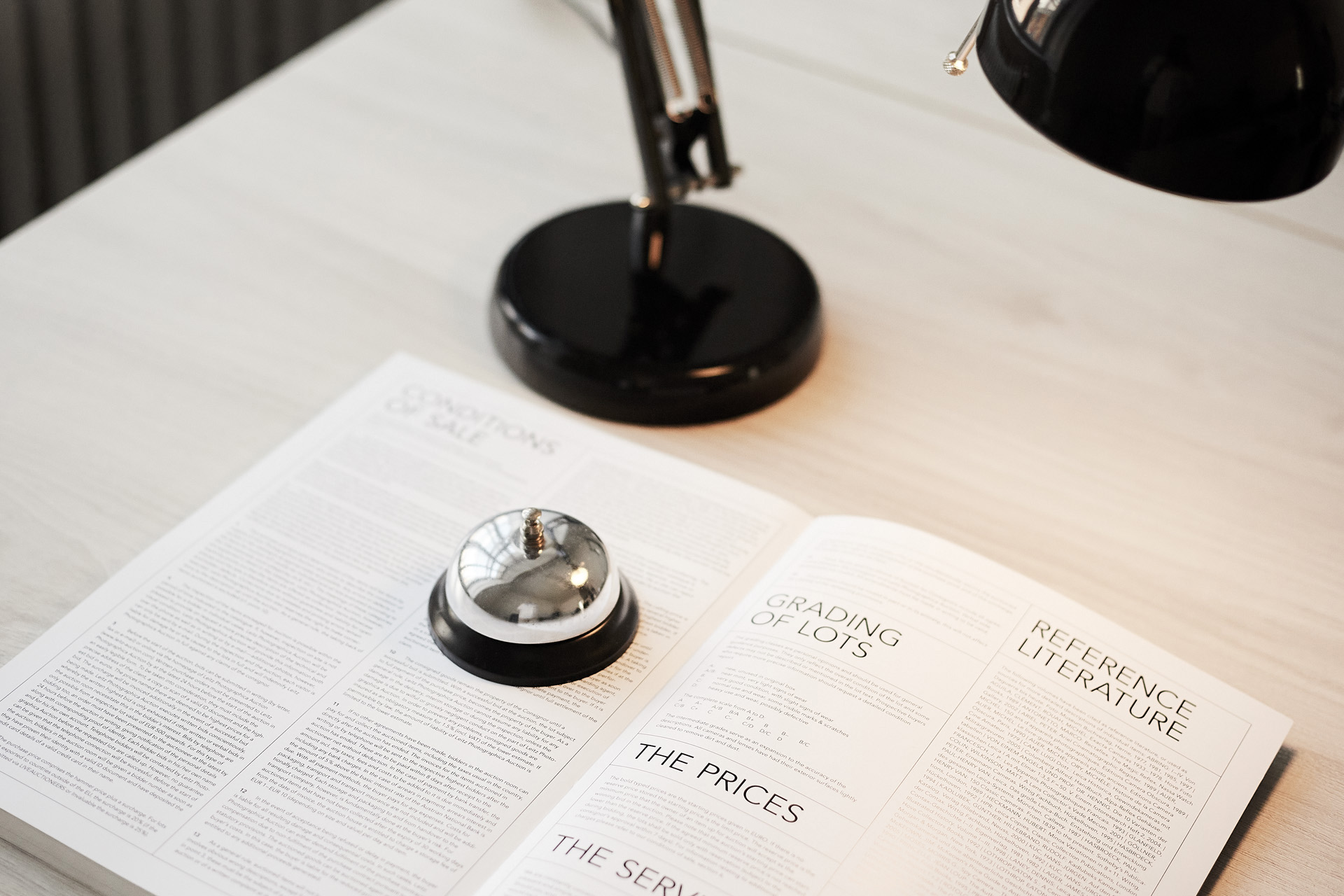 Bids and personal data of the bidders and consignors will be treated as strictly confidential by Leitz Photographica Auction and not forwarded to third parties. If, however, a credible claim to a consigned item should be filed by third parties, and it not be possible to clarify the ownership circumstances otherwise, the auction house is entitled to disclose the name and address of the consignor.

2) The auction is public and voluntary and will be carried out pursuant to the provisions of Section 158 of the Trade Code (Austria) and according to these Terms and Conditions of Auction. The auction is done in our own name for third-party account (commission transaction). Unless this conflicts with mandatory national or European provisions, the parties agree Vienna, Austria, as the place of performance and place of jurisdiction. In the relationship to foreign consignors who do not have their place of residence in Austria but instead in another Member State of the European Union, Austrian law is decisive unless this conflicts with mandatory national or European provisions.

3) The estimate and specialist determination of the items will be done by experts of Leitz Photographica Auction who strive to describe the condition of the lots in the catalogue as appropriately as possible. Any errors or defects in the items for auction will usually be indicated and all lots evaluated according to the internationally usual categories (A,B, etc.). The meanings of these categories are explained in detail in the catalogue. Leitz Photographica Auction, however, explicitly points out that the items are offered as collectors‘ items (showcase pieces) and the sale is therefore done without guarantee and liability for open and hidden defects. Corrections due to mistakes and printing errors remain reserved. Leitz Photographica Auction also reserves the right to make corrections to the description up until the auction. As a general rule, the taking back of items auctioned is excluded (cf. point 12).

5) Before the start of the auction, bids can be submitted in writing (by letter, fax or e-mail) or online via the homepage of Leitz Photographica Auction (www.leitz-auction.com). Written purchase orders must be presented to Leitz Photographica Auction by at the latest 24 hours before the start of the auction in an easily legible form. To be taken into consideration, they must include the precise address of the client, a copy or scan of a valid ID document and the highest bid in euros. The prices named there are deemed to be highest prices for a bid. The surcharge will be invoiced additionally in the event of a successful bid being made. Leitz Photographica Auction executes written bids conscientiously, whereby the written highest bid is only exhausted if other written or verbal bids in the auction room necessitate this in the bidder’s interest. Bids by telephone are only possible from a respective lot value of EUR 500 upwards. For this type of bidding too, an order must have been presented to the auctioneer at the latest by 24 hours before the auction in writing, giving notification of the personal details along with corresponding proof of identity. Each bidder bids in his/her own name and for his/her own account. Telephone bidders will be contacted by Leitz Photographica Auction before the requested lots are called up. However, no guarantee can be given that the telephone connection will be successful. Before the start of the auction, bidders in the auction room will be given a bidder number as soon as they have proven their identity with a valid ID document and have deposited the credit card details of a valid credit card in their name.

6) The purchase price comprises the hammer price plus a surcharge. For lots that will be exported to countries outside of the EU, the surcharge is 20% (if the bid was submitted via LIVEAUCTIONEERS the surcharge is 25%).

For lots that remain in the EU, the surcharge is 24% (if bidding has been done via LIVEAUCTIONEERS, the surcharge is 30%). On lots that are marked in the catalogue with *, VAT, currently amounting to 20% in Austria for cameras, lenses and accessories; 13% for photographs or 10% for books, will become due and be charged on the hammer price and surcharge (full taxation) if they remain in the EU. In the event of an intra-Community purchase, or such a purchase is claimed, commercial bidders must indicate their VAT ID. If a buyer with a domicile outside of the EU takes the auctioned lots with him/her himself/herself in countries outside of the EU, he or she will, in the case of normal taxation, be reimbursed the VAT as soon as he or she presents the proof of export issued by the Austrian customs authorities. Import sales tax and customs incurred abroad will be borne by the buyer. Invoices issued during or directly after the auction must be subsequently checked; errors excepted.

7) The auction is done in the sequence of the catalogue numbering. The catalogue text of the printed German version of the auction catalogue is decisive, but the auctioneer is entitled to summarise, separate, remove or change the order of catalogue numbers in the auction. He or she can reject offers and rescind a successful bid already made in order to auction the respective item further.

8) Bidding increases by approx. 10% of the calling price. The calling price is usually the starting price listed in the catalogue unless there are several higher written bids. In this case, the auctioneer calls out in favour of the highest bidder at the amount that is 10% above the written bid by the second-highest bidder. If there are several written highest bids of the same amount, a decision is taken in favour of the bid first submitted. The successful bid is the hammer price.

10) The consigned goods remain the property of the Consignor until a successful bid is submitted. With a successful bid at the auction, the lot subject to full payment of the purchase price, becomes the property of the buyer. As a general rule, Leitz Photographica Auction cannot assume any liability for any damage in the delivery, interim storage or during the inspection, unless the damage is due to wilful or grossly negligent conduct on the part of Leitz Photographica Auction. In order to prevent any problems, consigned goods are insured as an obligatory measure for 1.5% (incl. VAT) of the lower estimate. If permissible by law, the amount of liability of Leitz Photographica Auction is limited to the lower estimate.

11) If no other agreements have been made, bidders in the auction room can pay for and collect the auctioned items, including the taxes usual in the country, directly after the auction has ended. The invoices for the items auctioned in writing or by telephone will be sent to the respective highest bidders after the auction has ended. These are to be paid within 8 days after receipt to the auctioneer net without deduction. In the case of payment by bank transfer, the amount incl. any taxes, fees and costs to be added to it is due immediately and including any bank charges. In the case of arrears in payment, arrears interest in the amount of 5% above the basic interest rate of the Austrian National Bank is due. With all payment methods, the buyer pays for any expenses. Costs for packaging, transport and transport insurance are not included and will be additionally charged. Each storage and packaging to and from handover to the transport company, however, is fundamentally done at the buyer’s risk. For auctioned items that have not been collected after the expiry of 30 working days from the date of invoice, the auction house is entitled to charge a storage fee of 1€ - 10€ (depending on size and value) per day and item.

12) In the event of acceptance being refused or delay in payment, the buyer is liable for all resulting damage and consequential costs. In such cases, Leitz Photographica Auction can either demand fulfilment of the purchase contract or compensation due to non-fulfilment of the purchase contract pursuant to the statutory provisions. The auctioned goods can be auctioned again at the buyer’s costs. In this case, the buyer is liable for the reduced price and is not entitled to any additional proceeds generated.

13) As a general rule, auctioned items will not be taken back. If, however, it involves obvious wrong descriptions, except for technical defects as described in point 3, these must be the subject of a verbal complaint straight after the auction or of a written complaint at the latest after 14 days. If the complaint is recognised as valid, the buyer, if he or she simultaneously returns the auctioned item, has the right to reimbursement of the purchase price and of the surcharge. No further claims can be filed.

14) These Terms and Conditions of Auction for Consignors include all agreements between the Consignor and Leitz Photographica Auction. Verbal side agreements are invalid. All amendments must be made in writing to be valid.

15) If a provision should be invalid in part or in its entirety, this will not affect the validity of the remaining provisions.